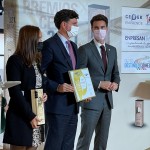 The Business Confederation of Bizkaia – CEBEK has awarded Uniforce Spain the “Equality Award”, which recognizes Bizkaia Companies that stand out for the actions carried out to promote equal opportunities for women and men in the workplace.

With these awards, CEBEK aims to highlight the important role that companies play in the well-being of society and in the economy of the Bizkaia territory.

The awards were given by Carolina Pérez Toledo (President of CEBEK), Unai Rementeria (General Deputy of Bizkaia) and Xabier Ochandiano (Councilor for Economic Promotion, Commerce and Employment of the Bilbao City Hall).

On behalf of Uniforce Spain, the award has been collected by Eugenio Erhardt Barrenechea, and María Victoria Pérez, Director of Management Control

The jury has awarded Uniforce Spain for its commitment to promoting gender equality, “seeking equal recognition for equal capacity.”

Eugenio Erhardt Barrenechea highlighted that “We feel this award is a recognition of the work that we have been developing. Since our beginnings as a company, we have tried to build the company based on our commitment to society and people, with a leadership style focused on respect and equal opportunities. ”